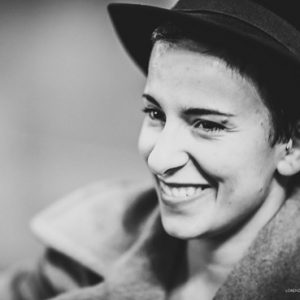 Born in Italy, Elita Cannata is currently based in Amsterdam. She has studied Countertechnique since 2005 and performed with anoukvandijk dc in 2007 and 2008. She attended her first Countertechnique Teacher Training (CTTT) program in 2014 and, with the support of the Amsterdams Fonds voor de Kunst, returned to the CTTT in 2018 and progressed to the level Senior Teacher.

Elita Cannata graduated with a Bachelor of Dance in 2007 at Rotterdam Dance Academy / Codarts in the Netherlands and in 2011 got her MA in Theories of Performing Arts at the Università degli Studi in Bologna. During and after her graduation she danced with José Navas, Megumi Nakamura, anoukvandijk dc, Cathy Sharp Ensemble, Compagnia Tpo, Tan Temel, Samuele Cardini, Itzik Galili , Fabrizio Favale and David Middendorp among others. Next to her dance and teaching career, she also used to work for several dance companies in the Netherlands as a Rehearsal Director.

As a Countertechnique teacher she visits many Institutions and dance companies around Europe such as Nederlandse Dans Theater, Skanes Dansteater, Goteborgsdankompani and Dance Theater Heidelberg to name a few. Currently she is a returning teacher for the curriculum of Dance Academies like Artez and Expanded Contemporary Dance in the Netherlands.
She also assists Anouk van Dijk at the Countertechnique Teacher Training of 2021 and 2022 and will be teaching at OBOC 2022.