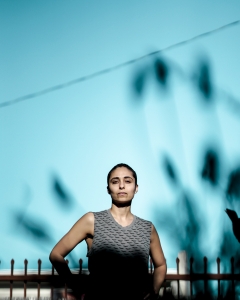 Danielle will give dancers a short taste (45 minutes) of her repertory/creation process right after her Gaga class. She is be happy to get to know the local community and explore in a new environment. This is included in the class price, and it is not to follow all days, although you are warmly invited. It is required to take her Gaga class in beforehand from 11:00 -12:15. This is in the framework of a new HJS program called ‘chorography training’ where dancers can learn rep and processes of visiting and local choreographers.

Danielle will teach a Gaga class, and her fine, detailed explanations help her students participate intellectually, mentally, and physically all at once. Agami believes that in order to fully own the revelations in the body we must understand the logic and fantasy behind each experience in class.
https://www.ate9dancecompany.com/

Originally born in Israel in 1984, Agami studied at the Jerusalem Academy of Music and Dance High School and was a member of the Batsheva Dance Company from 2002-2010. Between 2007-2009, Agami served as the artistic director of Batsheva Dancers Create and functioned as the company’s rehearsal director from 2008-2010, during which she received the Yair Shapira Prize for Excellence in Dance in 2009.

In 2011 Agami relocated to New York City, where she functioned as Senior Manager of Gaga U.S.A. Since arriving in the U.S., Agami has met and taught thousands of dancers. During 2011 she created original work at Rutgers University (NJ), Boston Conservatory (MA), Springboard Montreal, Cornish College for the Arts (WA) and more. In 2012 After relocating to Seattle, Agami founded Ate9 dANCEcOMPANY, as her first longitudinal project and created both Sally meets Stu and Sheila for Ate9. In 2013, she chose Los Angeles as the company’s home. During 2013 she presented TacTics forAte9,Shula in Israel,  for the Batsheva Ensemble, This Time Tomorrow for NW Dance Project in Portland, Oregon, Loose Gravel for Barak Ballet in L.A, and a unique collaboration with L.A. Dance Project forInvisible Cities by The Industry Opera. She was until July 2019 director of Ate9 Dance Company

Agami is a renowned Gaga teacher and for the past few years, has been traveling across the world as an ambassador of Ohad Naharin. In the past few years Agami has staged Naharin’s work with  Alvin Ailey Company, Ballet Atlanta, Ita Dansa / Barcelona, The Juilliard School, and more.

Class Description
Agami’s classes are informed by the great Gaga movement language classes and her fine, detailed explanations help her students participate intellectually, mentally, and physically all at once. Agami believes that in order to fully own the revelations in the body we must understand the logic and fantasy behind each experience in class.
Photo by Jacob Jonas