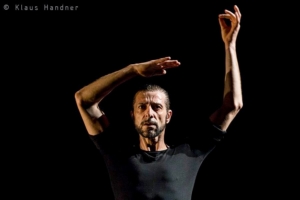 Andrés Marín is one of the most significant artists in flamenco today. His productions have centered on traditional flamenco, not from a conventional perspective, but through a radical personal vision and an utterly contemporary style. His dancing is considered one of the most innovative in flamenco dance. Marín began dancing as a child alongside his father, as a self-taught dancer, debuted professionally in 1992 and worked as guest artist and choreographer in various companies and shows until the formation of his own company in 2002. In all his works, there is an element of risk and experimentation, which he considers essential so that flamenco remains a living art. In addition to his activity leading his company,he has worked with different dance artists such as Blanca Li, Jirí Kylián, Bill T. Jones and Kader Attou.

Currently, Andrés Marín is working in Amsterdam on the international en interdisciplinary dance project Skiagraphia, an initiative of visual designer Siba Sahabi, in co-operation with modern dancer Kalin Morrow and director Marinus Groothof (intensively working with his partner Dunja Jocic). Skiagraphia will premiere on 12 July in the Rabozaal of ITA during festival Julidans.

In his masterclass he will focus on experimenting with crossovers between flamenco and modern dance, and applying his idiom in a free way; possibly using material from Skiagraphia. The workshop is not aimed at ‘learning to dance flamenco’ or learning fixed patterns and steps, but will use his own open and creative viewpoint in working on a crossover between the dance styles.
The masterclass is for both contemporary dancers of advanced/professional level and Flamenco dancers with advanced contemporary dance experience.