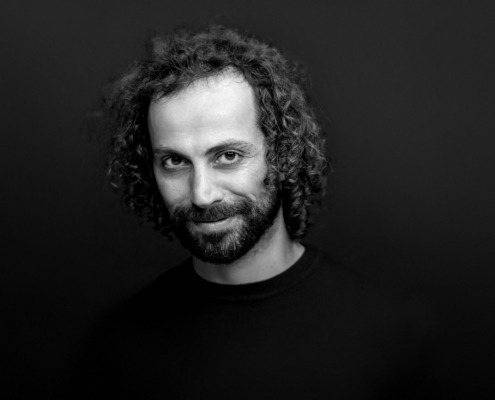 About the Workshop: Falling & Rolling

This workshop is based on a physical and powerful floorwork using movement patterns that involve breathing, speed and release of energy throughout the body to activate the relationship between the centre and limbs.  We will focus on exploring the main laws of physics: cohesion and expansion, elements from the flying low technique. Within this range we will study various ways to roll in all directions “Falling and Rolling”, dropping and lifting smoothly and quickly by keeping a low and strong centre. We will also investigate and focus on understanding the anatomy of the locomotor system, because without this knowledge, it can cause unnecessary loss of energy.

In this training we will do special exercises to prepare for this form of physically demanding movement.

GN | MC is an ensemble that involves the artistic works of the two choreographers and dancers, Guy Nader and Maria Campos. Based in Barcelona, the Lebanese and Spanish artists collaborate together since 2006 and have been creating several works shown internationally in different festivals and venues. GN|MC have been invited as guest choreographers to create for different companies such as EnKnapGroup in Slovenia, Eva Duda Dance Company/Movein Mission in Hungary, Tanzmainz company in Germany and XieXin Dance Theatre in Shanghai, China. GN|MC has been awarded the German theatre prize DER FAUST 2017 for their work FALL SEVEN TIMES created with Tanzmainz, Staatstheater Mainz in Germany and GN|MC received Prize City of Barcelona 2019.

GN | MC have been developing their own artistic language through movement and constantly redefining themselves while searching for new contexts and territories for dance. Their artistic work continues to pass over a wide range of progression.

“Our approach to dance reconfigures from one project to another, with every work achievement it becomes a learning process where we discover new places to explore, that later on lay out into a specific language and contour.”

Guy Nader was awarded with the first prize in Masdanza International Festival in 2010 with his solo WHERE THE THINGS HIDE.

Register HERE;  you can upload your  BIO and Dancevideo in this form and is required.