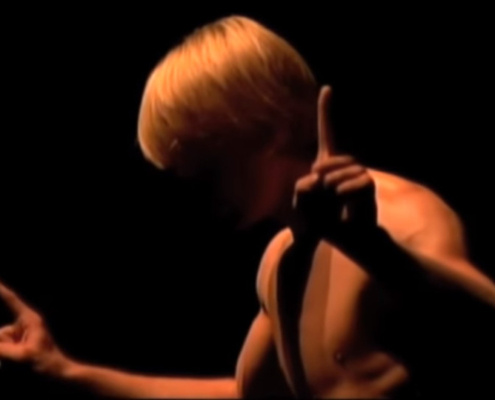 This 5 days workshop will be an opportunity for everyone interested in Marco Goecke`s rich and challenging work to explore his choreographic language. Participants will get the opportunity to experience and learn material from his piece ‘Äffi’ on music by Johnny Cash. A solo full of fun, sadness and much more emotions to explore together with Marijn Rademaker.
For male & female dancers!!
The workshop will work towards the informal presentation of Friday evening at 18:15. Take this into consideration while arranging your travel.

Marijn Rademaker, born in Nijmegen, Netherlands. He started his ballet training in Nijmegen and continued training at the National Ballet Academy in Amsterdam, Artez in Arnhem and completed his studies at the Royal Conservatory in Den Haag in 2000. He won many prestigious prizes, 1999 he won the Grace prize of foundation Dansersfonds ‘79 from Alexandra Radius and Han Ebbelaar and in 2018 he was awarded the ‘Grand Prix’ at the Dance Open Festival in St. Petersburg.
In 2000, Marijn Rademaker became a member of the Stuttgart Ballet. He worked together with many choreographers creating new work such as Wayne McGregor, Marco Goecke (Äffi, On Velvet), Mauro Bigonzetti, and others.
Marijn guested with companies like The Tokyo Ballet, The Hamburg Ballet and the Zürich Ballet. Marijn Rademaker is invited to galas all over the world such as The World Ballet Festival in Tokyo, Men in Motion, Roberto Bolle and Friends, Malakhov’s Gift, Nijinsky Gala, Hamburg, Les Etoiles sous les Etoiles and others.
In January 2015 he joined the Dutch National Ballet as a principal dancer. He also worked with the Dutch National Ballet’s junior company and main company as a balletmaster. After being an assistant-balletmaster with the Dutch National Ballet and it’s Junior Company he decided to start dancing again as a freelancer. Marijn recently started to choreograph too and made a pas de deux together with Matteo Miccini called ‘What we’ve been telling you’ for the famous Noverre Society in Stuttgart and he made a piece with John Neumeier’s Junior company of the Hamburg Ballet Ballet called ‘The egg boy story X’ In 202 he worked with Nanine Linning in her prize winning piece “Bacon”.